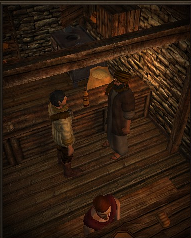 This is a Loremaster-only NPC who appears briefly at The Last Meal, near the innkeeper.

A man with sun-darkened skin, unkempt hair and a heavy beard. His faded, worn-out clothes are still covered with road dust.

He can't yet afford a comfortable stay in Teron, and offers several items for sale to earn his keep. [Hidden Check] Lore 3: After some junk items, he produces the Prospector's Amulet.

A breathing apparatus of the Old Empire. When charged with magical energies, it will allow you to breathe in toxic environments. A valuable artefact, it's been handed down the generations from father to son. The magic powering up the device eventually ran out and the purpose was lost. All that was remembered was that it is a powerful charm, protecting its wearer from unseen danger.

The Amulet is a bejeweled Respirator, and as such can be used to traverse The Abyss and/or the Dead River, provided you have Lore 5 and expend a Power Module.