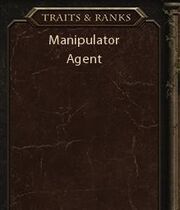 The following can be considered spoilers

You're a low-ranked member of the Commercium.

You're a low-ranked glory-seeking fighter at the Arena.

"You've boosted your cellular regeneration at the expense of your overall health and longevity."
+1 HP Per turn/-5 Max HP (or +2 HP per turn/-8 max HP if created with 10 alchemy), The Elixir Quest - Merchant Plaza Healer.

You’ve shown an interest in relics of the past and managed to acquire five different pieces, without having any idea what most of them are for.

Instead of killing Lord Antidas, you’ve managed to broker an alliance between House Daratan and the Imperial Guards.

Your hastily assembled black-powder bomb has made quite a blast, literally and figuratively. You should consider taking a few lessons in Alchemy.

You’ve demonstrated the power of persuasion by convincing Lord Antidas to order an assassination of Commander Carrinas without producing any proof.

You've awakened a demi-God and attained an ability to shield your mind from negativity and other unpleasantries, destroying an entire city in the process.

You’ve managed to infiltrate House Daratan’s compound and discuss employment opportunities with Lord Antidas, without having to jump through Dellar’s hoops first.

You had a heart to heart conversation with loremaster Sohrab and made him tell you everything he knew.

Even though Teron was sealed tighter than a drum, you’ve managed to fight your way out, leaving nothing but corpses behind.

Instead of killing Lord Antidas, you’ve managed to broker an alliance and convinced Commander Carrinas to proclaim Antidas an Emperor.

You’ve provoked Lord Antidas to attack the Imperial Guards delegation and killed him without hesitation in a fight that ensued, committing regicide.

You pledge your fealty to House of Dataran, swearing to serve Lord Antidas and observing your homage to him completely against all persons in good faith and without deceit.

Instead of dealing with the raiders and the Aurelian outpost separately, you talked the raiders into attacking the outpost for you, which solved both problems.
- To get the 'Manipulator' trait you must not take any hostile action at the mine yourself- killing the guards in front removes the necessary dialogue options from Dellar and Esbenus.

You've put a demi-God out of its misery, releasing it from the horror of its existence, and ending the magic that haunted the Abyss for centuries.

Even though Teron was sealed tighter than a drum, you’ve managed to fast-talk your way past every obstacle that was standing between you and the open road.

Not a <man/woman> of many words, you’ve solved both the raiders and the Aurelian outpost problems by killing everyone. Not very subtle, but extremely effective.

You’ve successfully convinced a preacher from Ganezzar that you’re the chosen one, sent by the gods to lead mankind out of darkness.