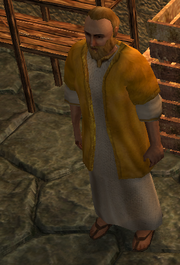 Zenon is a member of Commercium in Teron and Linos' right hand.

Teron Merchants Plaza, first door to the left after entering the merchant's guild.

After joining Commercium, he can train you in 15 Skill Points worth of Etiquette.

Zenon has been working in the Commercium for eight years.

Prior to that, he was working for the trading company of Antonius Messalla, for more than four years.

Master Messalla was prideful and though he could compete against the Commercium. He rejected an offer to become one of their guildmasters.

All of a sudden, nobody was buying his goods, the levies went up, and his caravans were attacked the moment they left towns. In the end, he lost most of his goods, as well as his people. He had to sell the company for next to nothing.